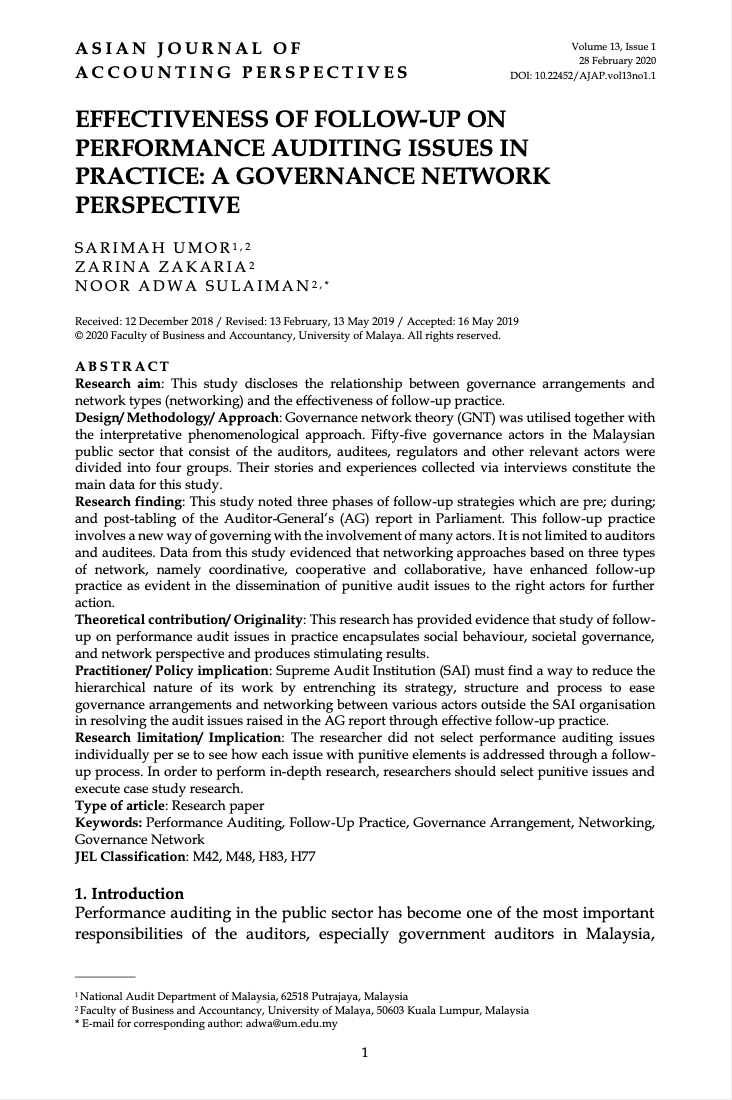 Research aim: This study discloses the relationship between governance arrangements and network types (networking) and the effectiveness of follow-up practice.

Design/ Methodology/ Approach: Governance network theory (GNT) was utilised together with the interpretative phenomenological approach. Fifty-five governance actors in the Malaysian public sector that consist of the auditors, auditees, regulators and other relevant actors were divided into four groups. Their stories and experiences collected via interviews constitute the main data for this study.

Research finding: This study noted three phases of follow-up strategies which are pre; during; and post-tabling of the Auditor-General’s (AG) report in Parliament. This follow-up practice involves a new way of governing with the involvement of many actors. It is not limited to auditors and auditees. Data from this study evidenced that networking approaches based on three types of network, namely coordinative, cooperative and collaborative, have enhanced follow-up practice as evident in the dissemination of punitive audit issues to the right actors for further action.

Practitioner/ Policy implication: Supreme Audit Institution (SAI) must find a way to reduce the hierarchical nature of its work by entrenching its strategy, structure and process to ease governance arrangements and networking between various actors outside the SAI organisation in resolving the audit issues raised in the AG report through effective follow-up practice.

Research limitation/ Implication: The researcher did not select performance auditing issues individually per se to see how each issue with punitive elements is addressed through a follow-up process. In order to perform in-depth research, researchers should select punitive issues and execute case study research.