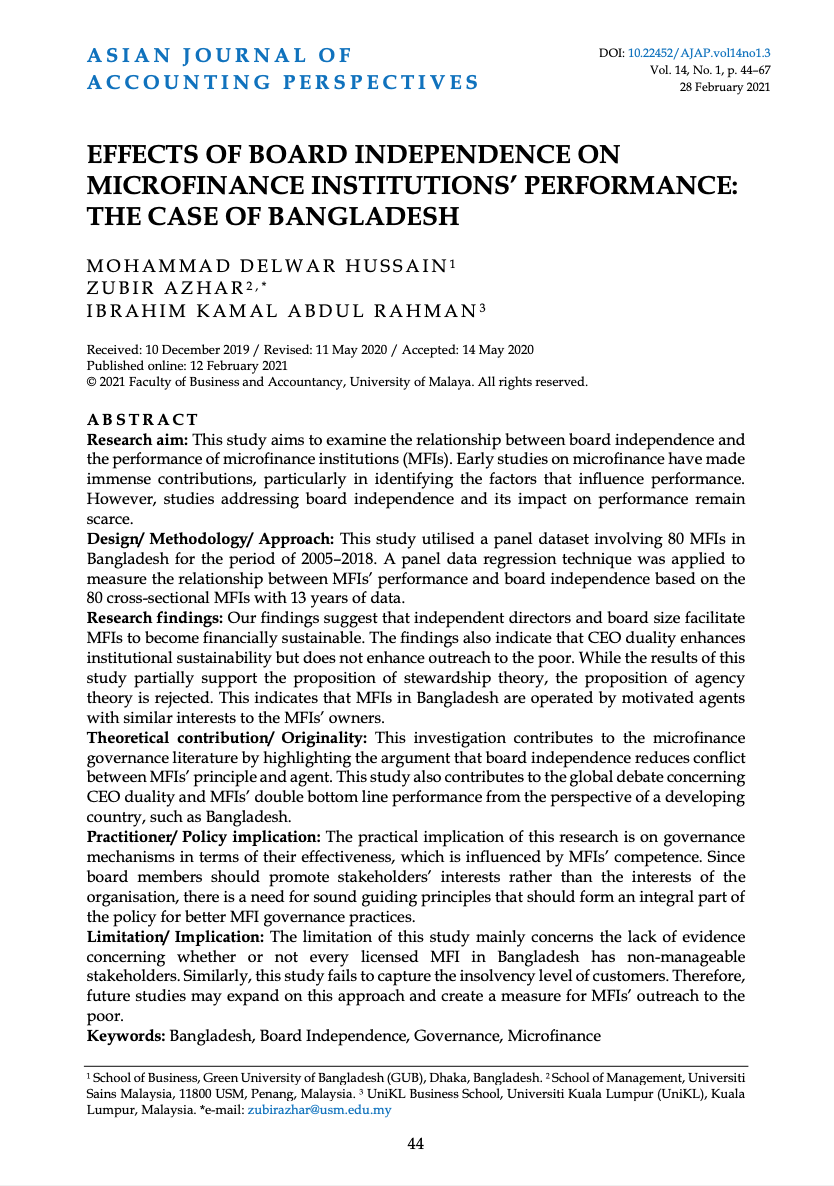 Research aim: This study aims to examine the relationship between board independence and the performance of microfinance institutions (MFIs). Early studies on microfinance have made immense contributions, particularly in identifying the factors that influence performance. Studies addressing board independence and its impact on performance remain scarce.
Design/ Methodology/ Approach: This study utilised a panel dataset involving 80 MFIs in Bangladesh for the period of 2005–2018. A panel data regression technique was applied to measure the relationship between MFIs’ performance and board independence based on the 80 cross-sectional MFIs with 13 years of data.
Research findings: Our findings suggest that independent directors and board size facilitate MFIs to become financially sustainable. The findings also indicate that CEO duality enhances institutional sustainability but does not enhance outreach to the poor. While the results of this study partially support the proposition of stewardship theory, the proposition of agency theory is rejected. This indicates that MFIs in Bangladesh are operated by motivated agents with similar interests to the MFIs’ owners.
Theoretical contribution/ Originality: This investigation contributes to the microfinance governance literature by highlighting the argument that board independence reduces conflict between MFIs’ principle and agent. This study also contributes to the global debate concerning CEO duality and MFIs’ double bottom line performance from the perspective of a developing country, such as Bangladesh.
Practitioner/ Policy implication: The practical implication of this research is on governance mechanisms in terms of their effectiveness, which is influenced by MFIs’ competence. Since board members should promote stakeholders’ interests rather than the interests of the organisation, there is a need for sound guiding principles that should form an integral part of the policy for better MFI governance practices.
Limitation/ Implication: The limitation of this study mainly concerns the lack of evidence concerning whether or not every licensed MFI in Bangladesh has non-manageable stakeholders. Similarly, this study fails to capture the insolvency level of customers. Future studies may expand on this approach and create a measure for MFIs’ outreach to the poor.
Keywords: Bangladesh, Board Independence, Governance, Microfinance
Type of article: Research paper
JEL Classification: G21, M41